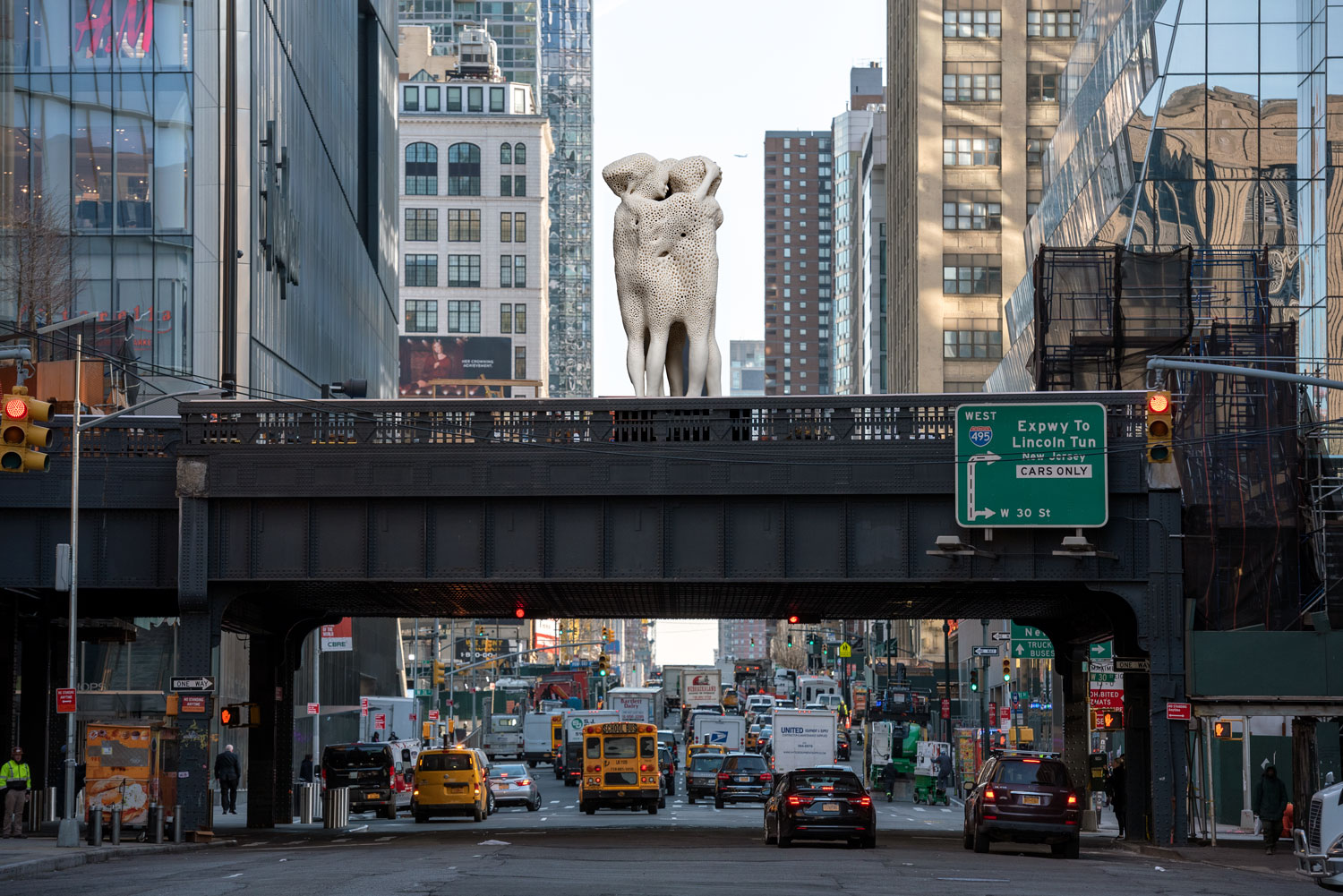 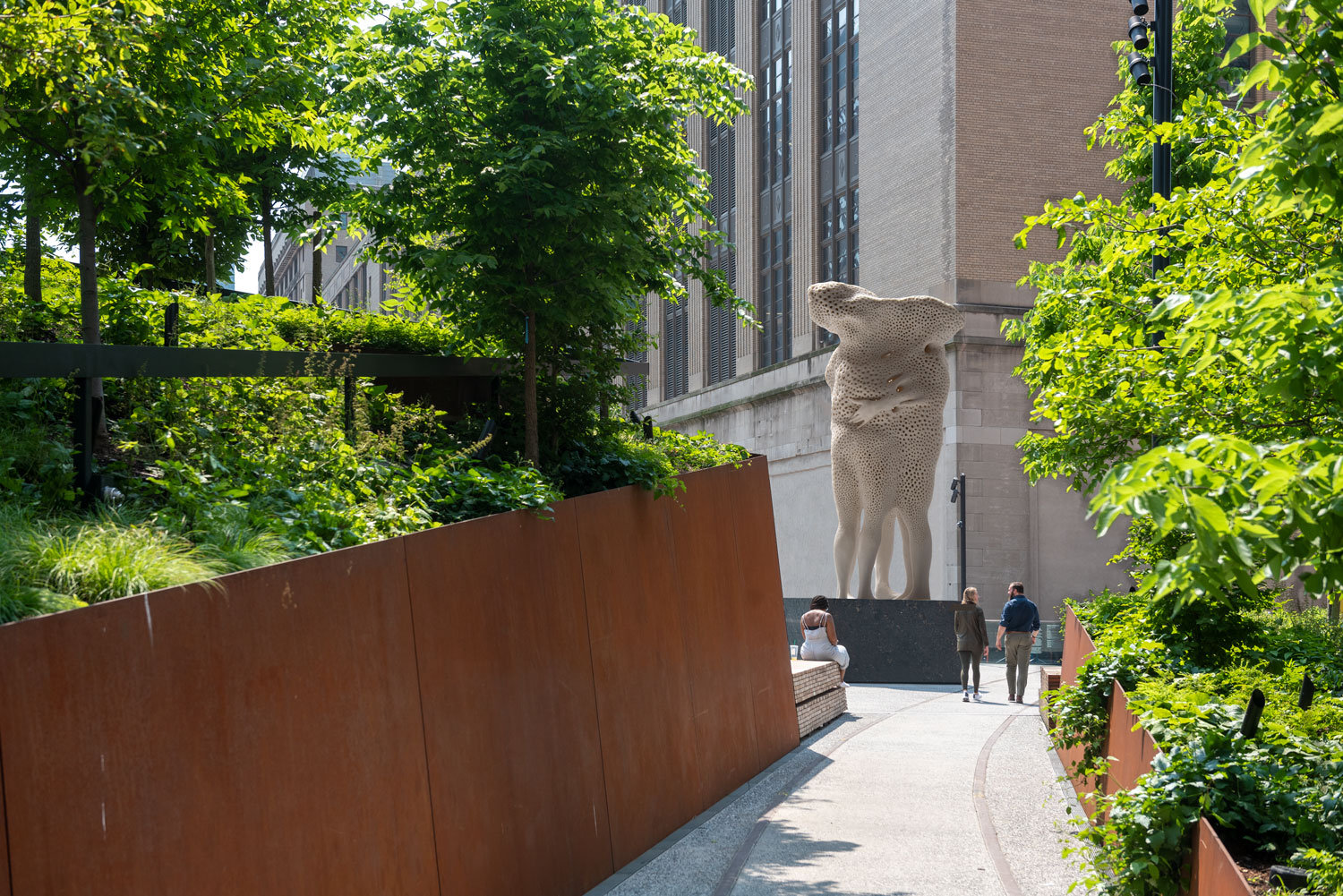 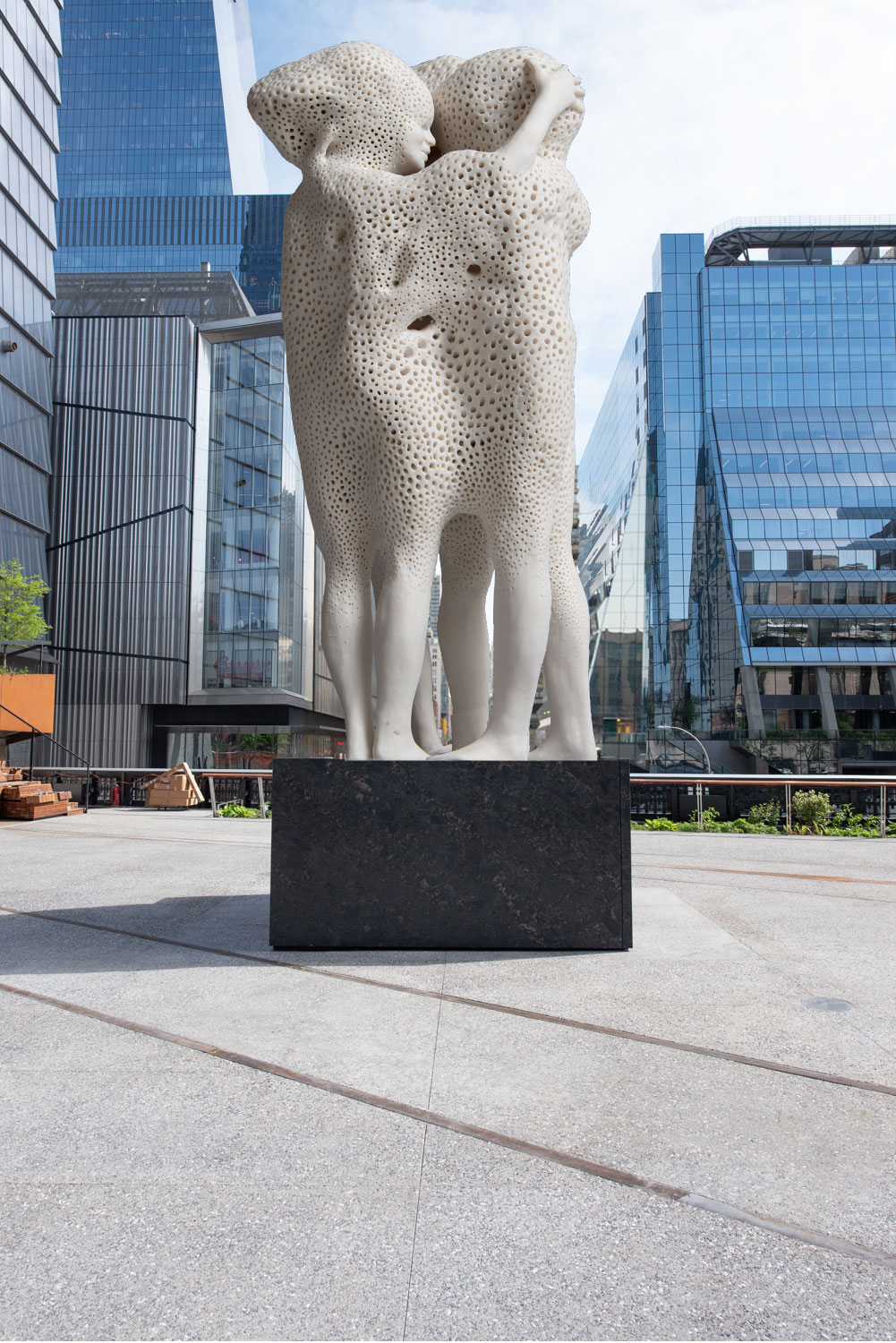 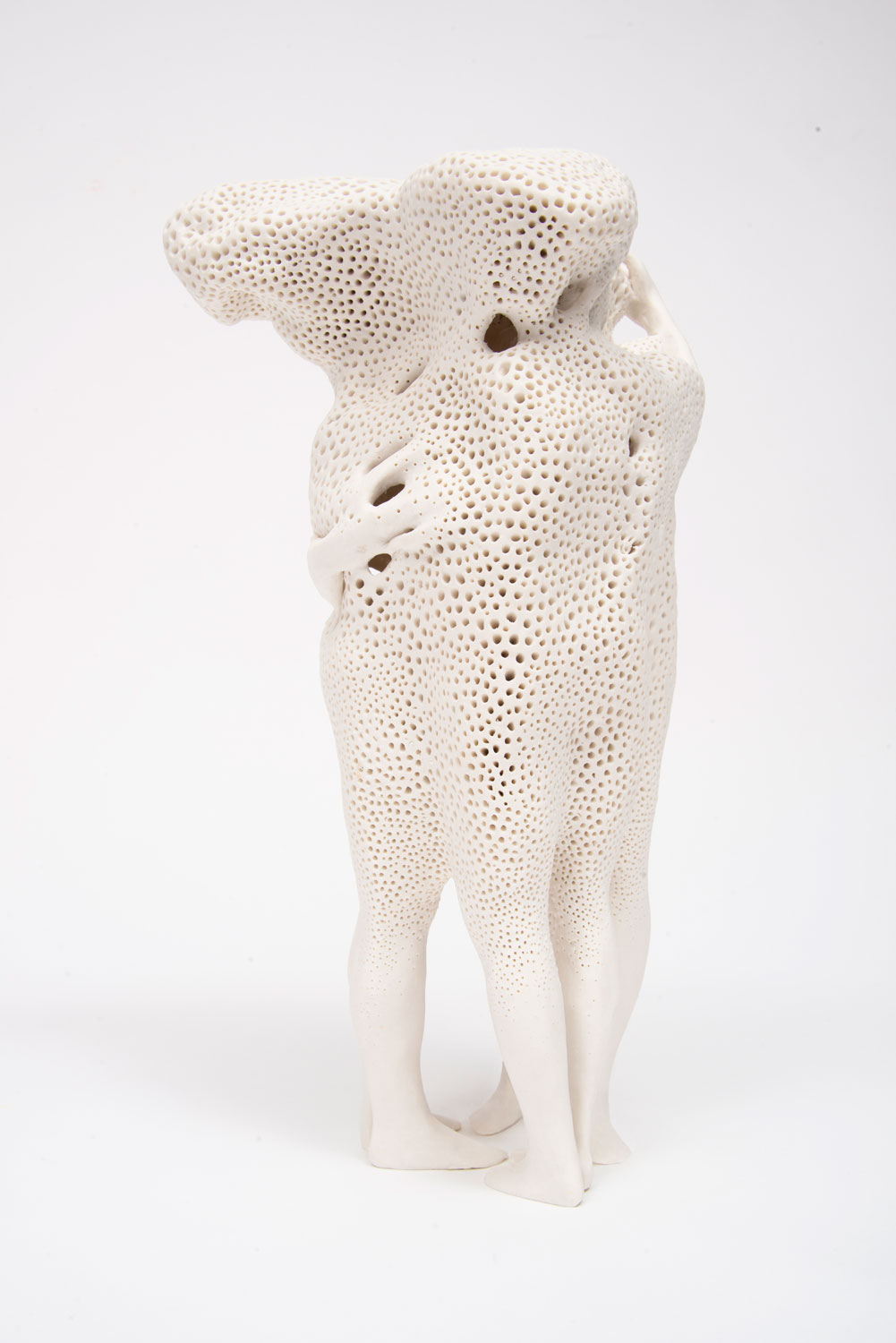 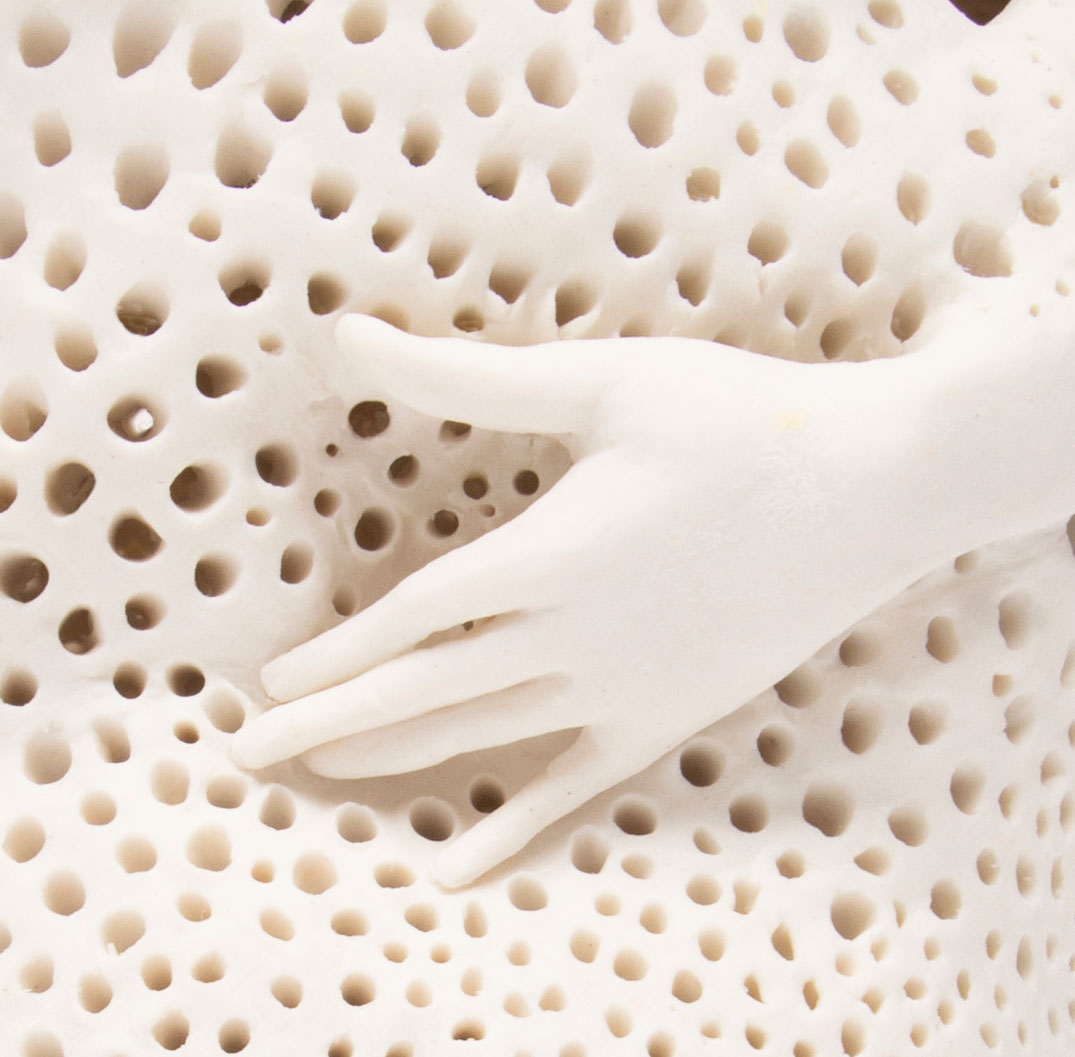 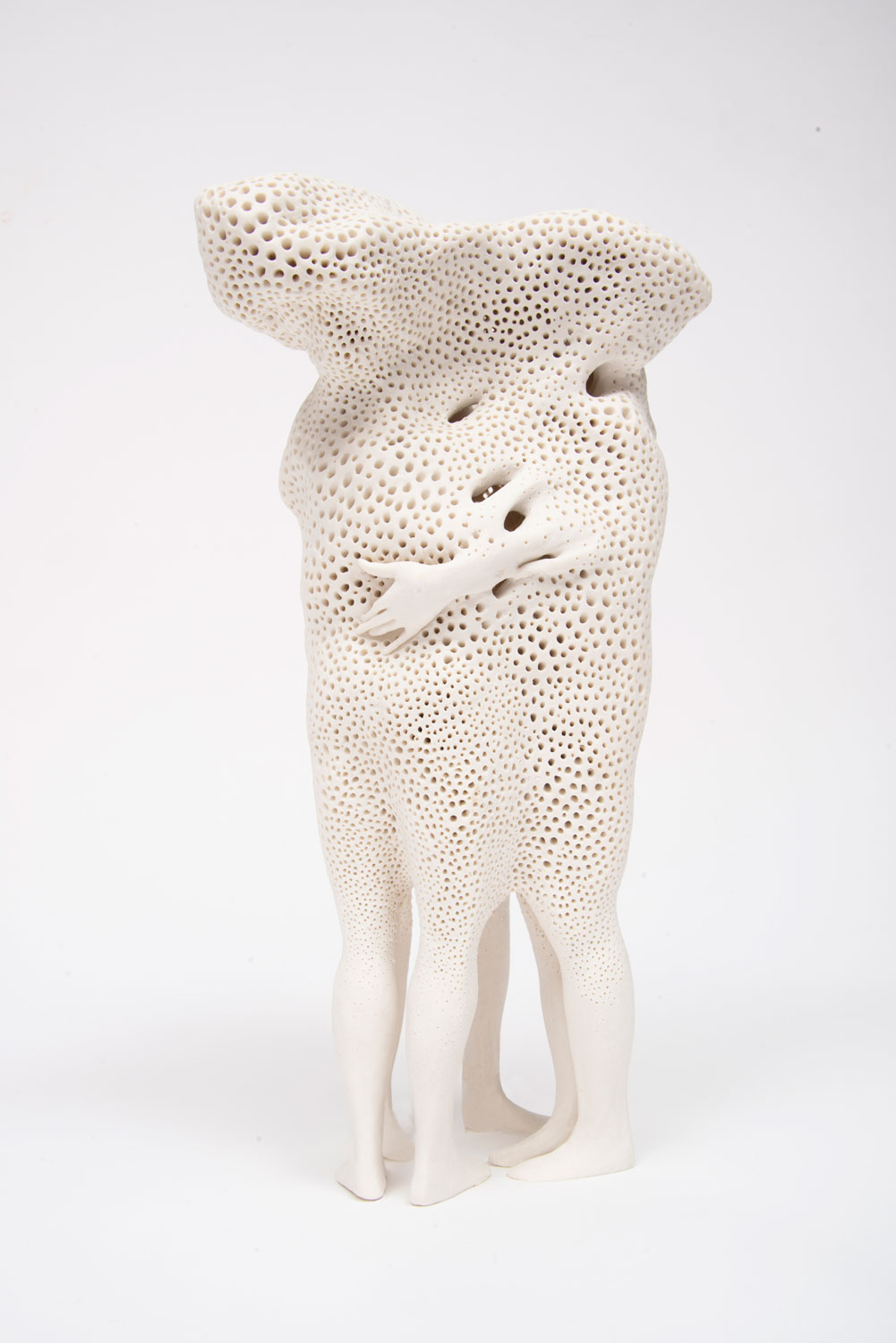 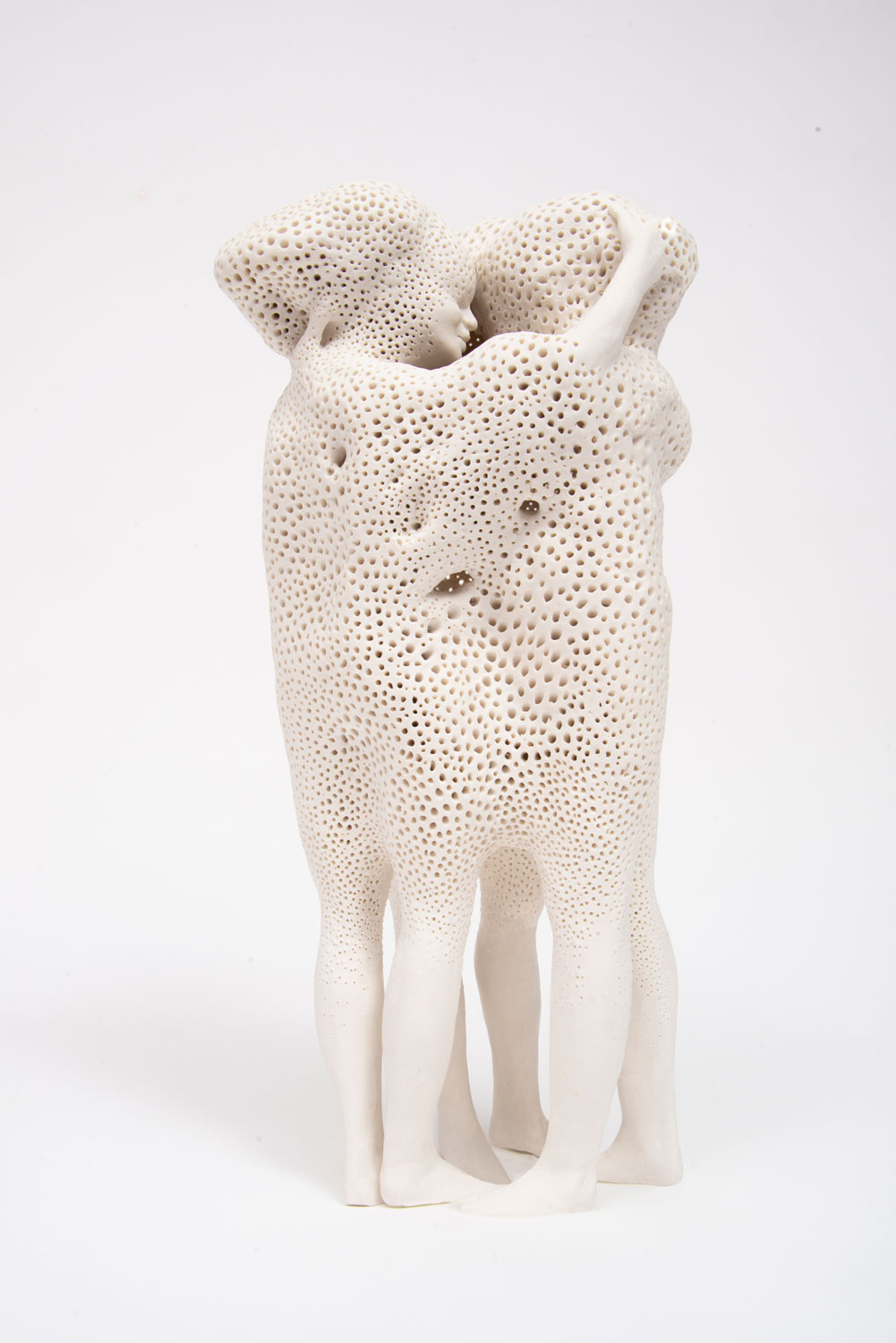 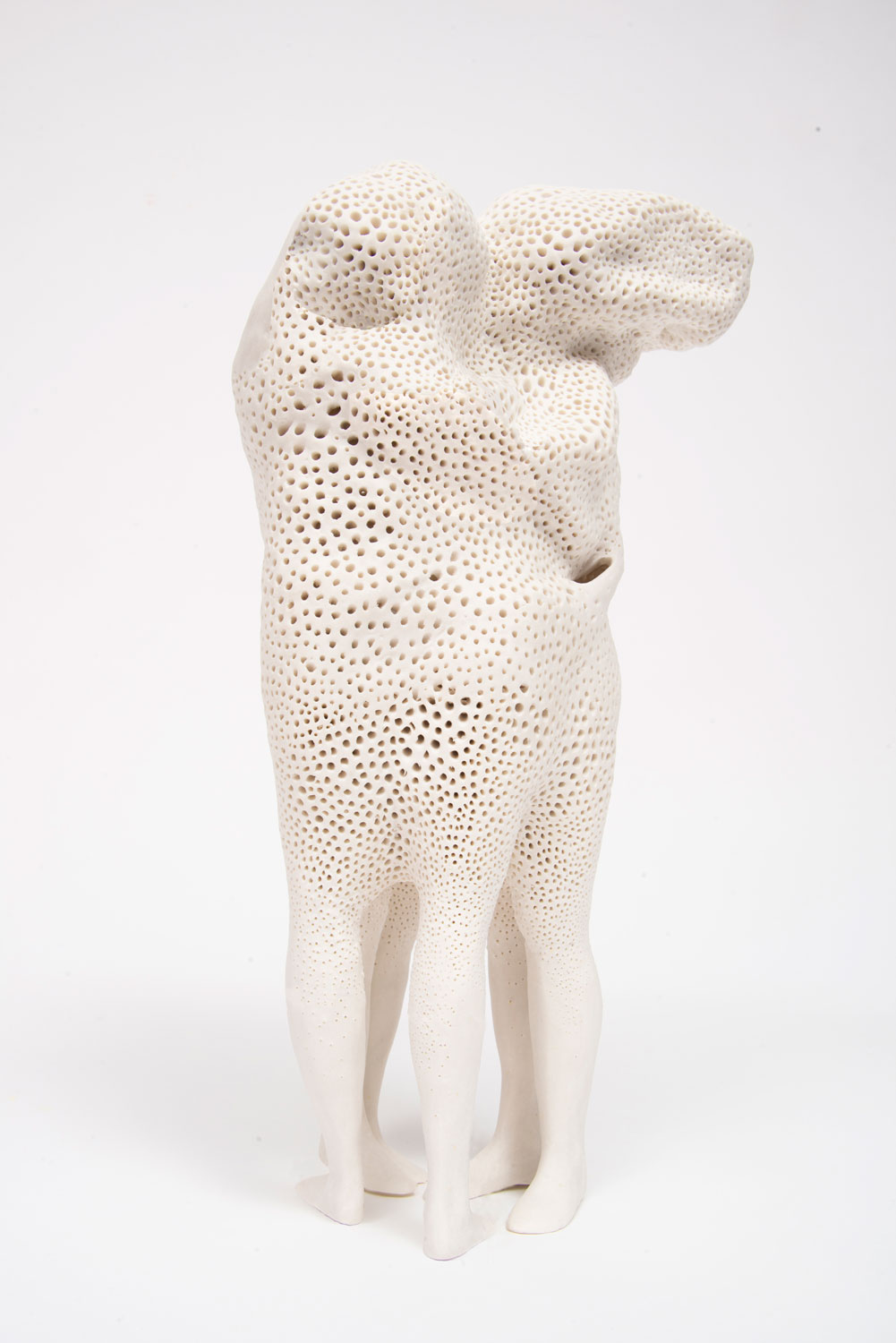 In 2019 I was nominated to present a proposal for the High Line Plinth, a programme for temporary monumental sculpture to be placed on a plinth at the Spur section of the High Line ran by High Line Arts in New York City. The invitation was to think about the relevance of monuments in public space today.

I proposed Foreigners, a 6m high chalk-white sculpture with a smooth, holey surface made of underwater concrete rendered in a water-based resin. Foreigners depicts three human-like beings in the act of embracing each other, merged into a coral or foam-like matter which gives the appearance of porous rock or reef to the whole.  The interior is hollow, allowing sunlight to go through the sculpture and to eventually project multiple spots of light in the shadow created by it on the floor. The plinth would be cladded with concrete slabs matching the Spur’s floor as if the floor had raised at that point.

The sculpture would be made of underwater concrete, with holes and pores that can function as habitat for local birds during the exhibition, and, as oyster habitat in the waters of the Hudson River once the exhibition period is over.
If the High Line Plinth proposes an exercise in rethinking the monument, Foreigners is my attempt to create a monument that is permeable, receptive and adaptable, able to host, shelter and restore, and that takes a holistic stand in the arts’ economy.

My point of departure was to consider the plinth as a portal between two sensorial apparatuses -human and more-than-human- that cohabit the High Line and its surroundings.

Foreigners is the amplification to a monumental scale of a series of small hand-size porcelain sculptures I have been developing since 2013. By adopting the opposite scale, the sculpture becomes a habitat. My proposal acknowledges that every public monument and statue is also a habitat usually colonised by birds, who see them as opportune perching and resting stations.

The cliff-like nature of Foreigners has the potential to attract the coastal birds that are familiar to the High Line, mostly seagulls and pigeons, both species naturally inclined to perch and shelter on rocky structures to rest, as it is easy to observe in the chalk white cliffs near Brighton, where I live.

In the process of creating this proposal, I was also inspired by the indirect winter sunlight that is reflected by the glass-cladded surrounding buildings onto the sculpture which is on the plinth at the moment. This type of light gives the whole scene an underwater quality which I found really beautiful. I found the idea of the monument as a habitat that can help creatures who live in the sky and in the water to thrive quite compelling. Yet each group of species remain foreigners to each other and to the humans that dominate their environment.

As a consequence, built into the narrative of the work is the plan to place the artwork underwater after the 18 months of exhibition on the plinth. The piece would then symbolically ‘travel’ towards the opposite end of the high line to reach its final destination under the waters surrounding the Hudson River Park, to serve as a habitat for oysters in the context of the Billion Oysters Project as final destination.

The Billion Oyster project aims to restore 100 acres of oyster reefs out of the 200,000 acres that have been wiped out by the effects of industrialisation and pollution, and that used to sustain the local Lenape people for generations until Western colonisation happened. The organisation has accepted my eventual donation of the sculpture after considering it suitable for their purposes. 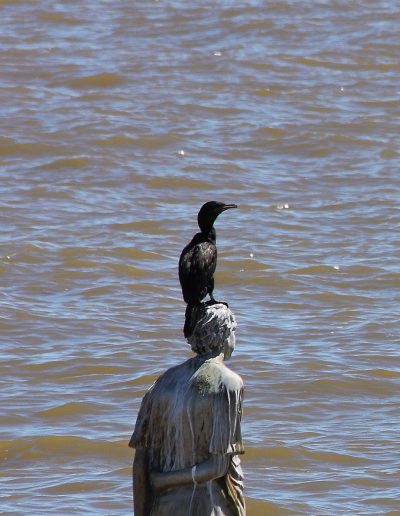 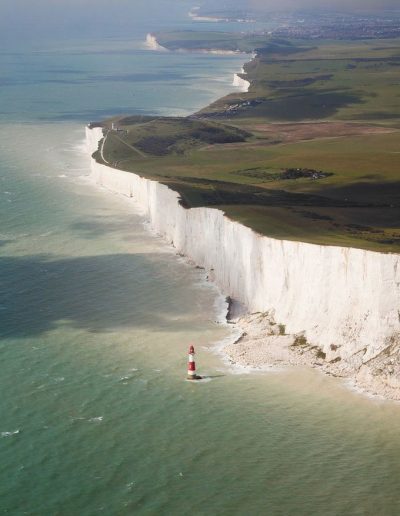 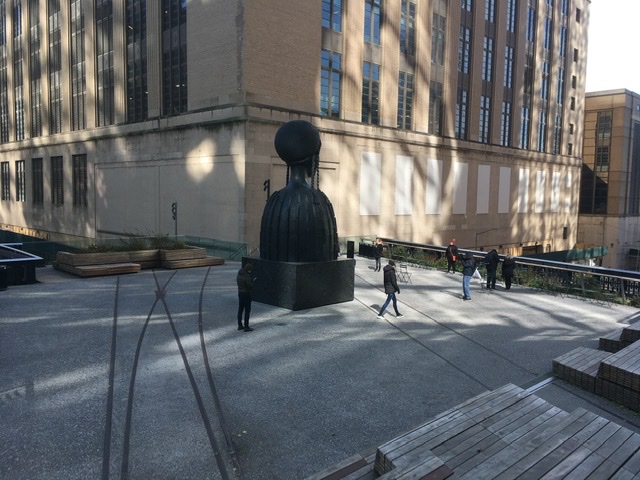 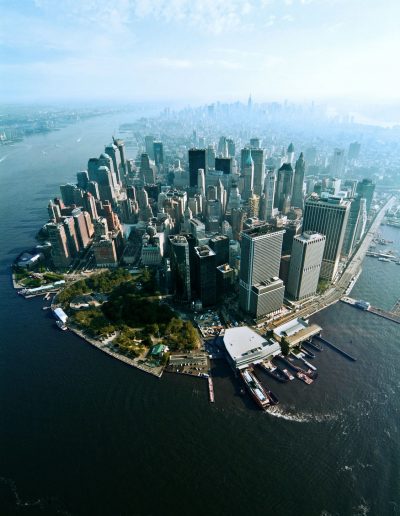 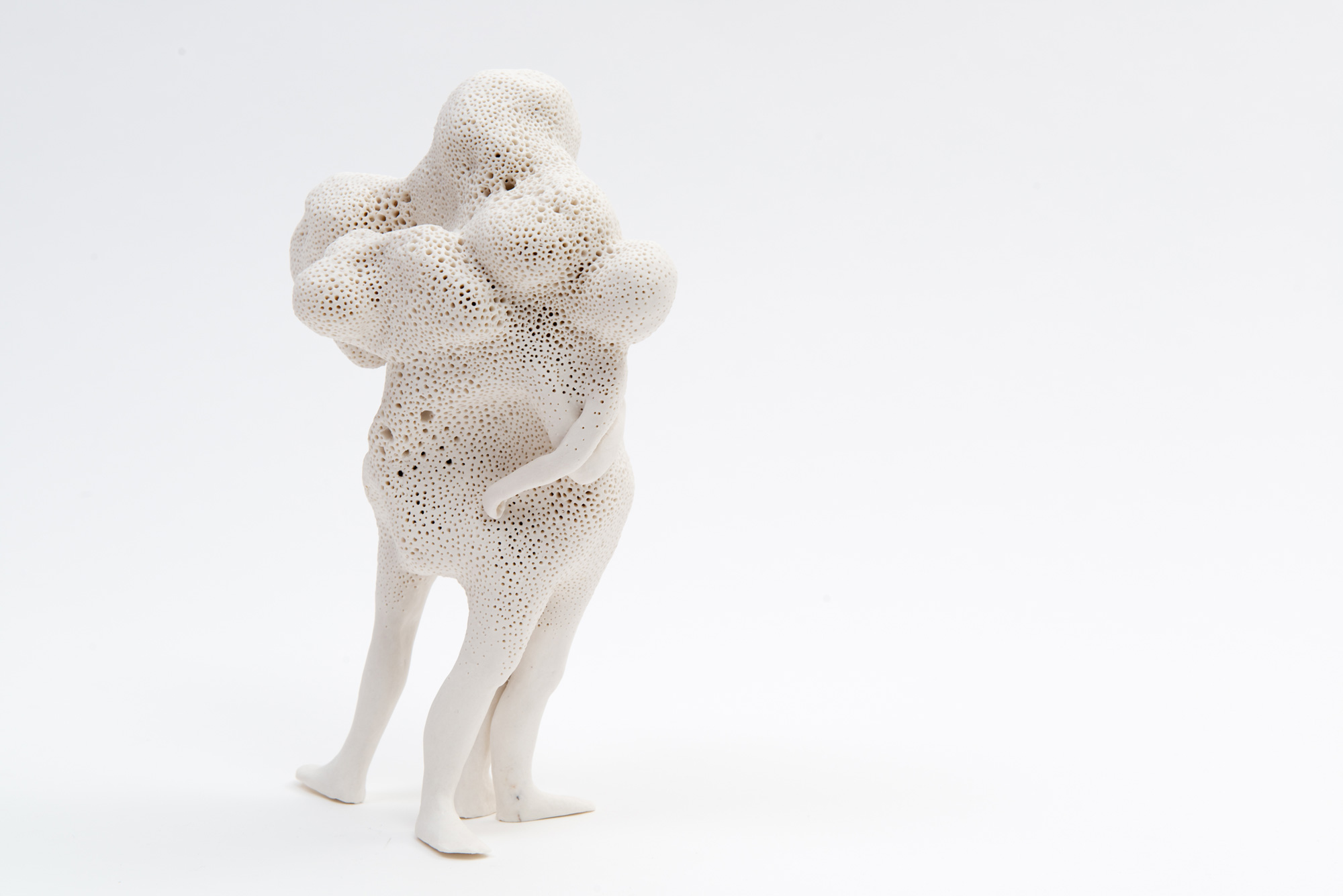 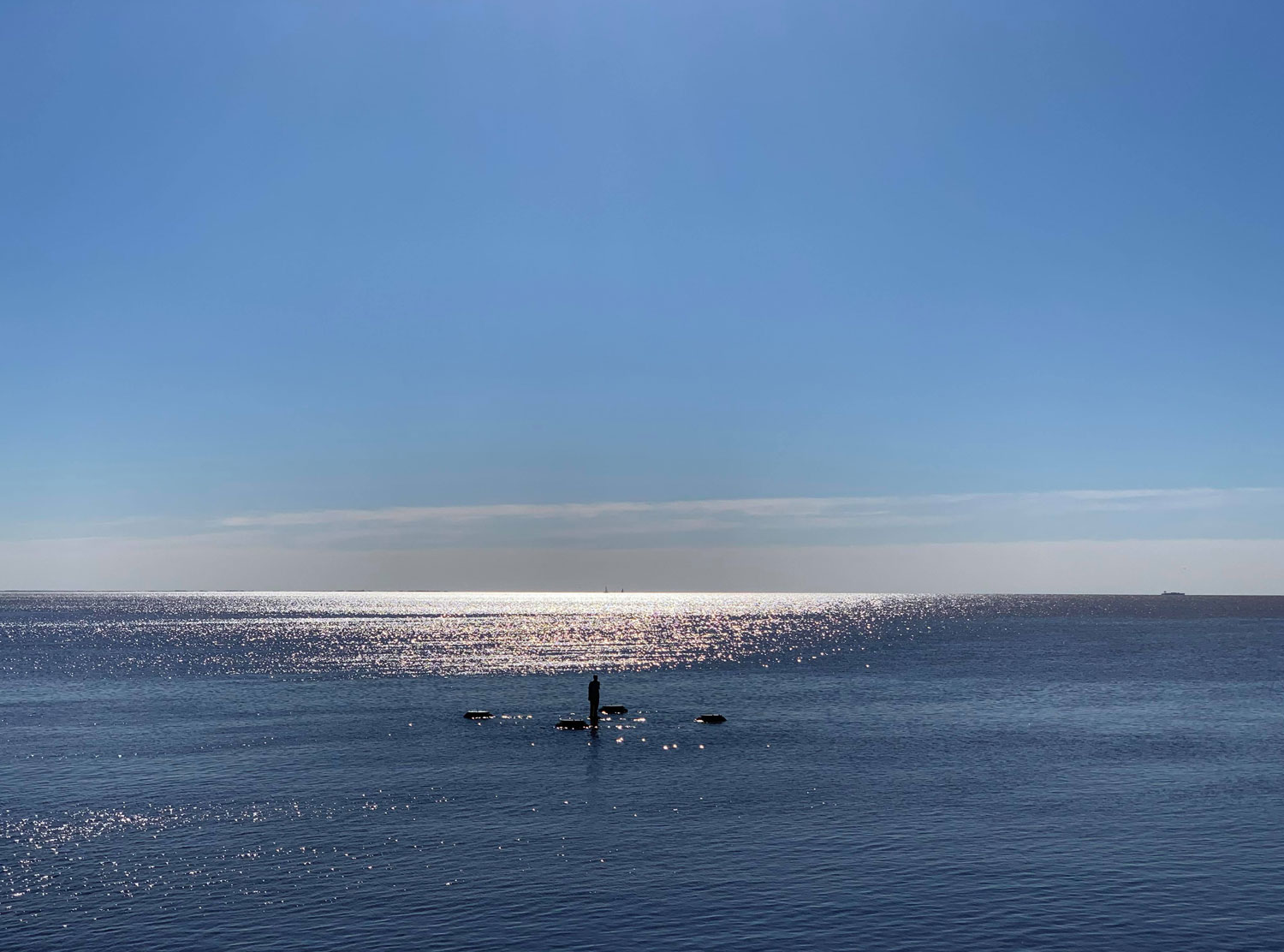 Reconstruction of the portrait of Pablo Miguez